Cowboy, the startup that’s building a new, smarter electronic bicycle, quietly launched in its home country of Belgium this past week, whilst simultaneously disclosing it has raised $3 million in seed funding.

Notably, the round is led by Index Ventures. The London and San Francisco-based VC appears to be particularly bullish on electric-powered mobility, recently backing electric scooter startup Bird.

Founded by Adrien Roose and Karim Slaoui, who both previously co-founded Take East Easy, an early Deliveroo competitor, and Tanguy Goretti, who was previously co-founder ride-sharing startup Djump, Cowboy has set out to build and sell a better designed e-bike that it claims addresses issues that have historically held back the category’s mass appeal. This includes a more elegant design than many existing models currently on the market, making the bike ‘smart’ by being connected to a mobile phone and ‘over the air’ through cellular and GPS networks, and better affordability than comparative offerings.

In a call last week, Roose gave me a brief run down of the Cowboy’s features and a little of the product’s back story, including how Index got interested. He says he first became aware of e-bikes (or “ped-elec” bikes that combine a manual pedal and electric motor) after being puzzled that they weren’t more widely used by Take Eat Easy’s bicycle couriers. Riders that did use an e-bike tended to be older, suggesting that current e-bikes didn’t appeal to a younger demographic.

After researching the market a lot deeper, Cowboy’s eventual founders also noticed that most e-bikes use entirely off the shelf components, which not only constrains differentiation, but also price, since most of the margin goes to parts suppliers and retailers. By designing a completely new e-bike, where the body and brain is bespoke — namely, the chassis/battery, and printed circuit board (PCB) — and where the product is sold direct online, the team believed there was an opportunity to re-define the e-bike category entirely.

The resulting Cowboy e-bike is pitched as a better ride, powered by “intuitive and automatic motor assistance”. This uses built-in sensor technology that measures speed and torque, and adjusts to pedalling style and force to deliver an added boost of motor-assisted speed at key moments e.g. when you start pedalling, when you accelerate, or go uphill.

In addition, the Cowboy it attempting to be more secure thanks to its connectivity. You unlock the bike via the Cowboy smart phone app, which also supports on-board navigation and a data dashboard that tracks speed and other useful stats.

It is also worth noting that this is definitely a vertical platform in the longer-run. That IoT-styled SIM card and GPS have been added to the e-bike for a reason. Initially it will be used for diagnostics and ‘find my bike’ in case of theft, but one can easily imagine other premium services being offered on top, such as bike insurance perhaps. 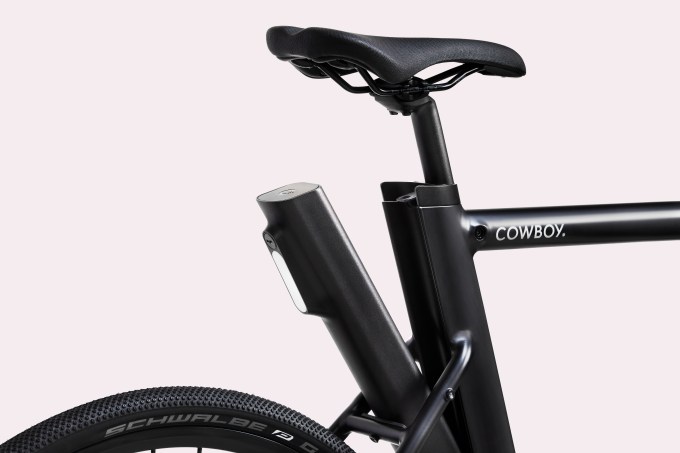 The battery is said to be good to go for around 50km, and takes 2.5 hours to fully charge. As part of the bespoke design, it is integrated into the frame under the saddle and is easily removable. The Cowboy claims to be one of the lightest urban electric bikes on the market, too (the bike and battery together weigh 16kg).

However, as with any product where it’s ultimately about the ride, you probably need to try a Cowboy before truly appreciating it — which, as a powered wheelchair user with limited muscle strength, I’m never going to be able to do. Instead, I’ll note that a pre-production model — which Roose admits still had many remaining issues to iron out — won the prestigious EuroBike trade fair in July 2017.

He also echoes this sentiment when I ask him to tell the story of how the Cowboy team first got the attention of Index Ventures. He says that the startup weren’t originally planning to raise a large seed round, having already got a commitment from Cowboy’s original backers for enough follow-on investment to do a production run and small launch in Belgium. However, knowing that hardware is, well, hard, and that costs can easily overshoot, the company was advised by Hardware Club (who he says has been instrumental in making Cowboy a reality) to find a larger VC backer to mitigate this risk. Index Partner Martin Mignot, who led the round, was immediately interested and then convinced after actually trying the e-bike, but Roose says that it took a lot more to persuade the rest of the Index team to back Cowboy when he subsequently pitched the startup over a video call.

Which brings us to Cowboy’s go-to-market strategy. If you really need to touch the device to truly appreciate it, how will the startup sell directly online? In Brussels, Roose says the startup is experimenting with recruiting product ambassadors — people who already have a Cowboy in their possession — who will be able to bring the device to a prospective buyer to try beforehand. This isn’t as scalable as a pure digital marketing effort, but is still likely a lot cheaper than selling to physical retailers, which in turn would push up the €1,790 price. Meanwhile, the company is only delivering to Belgium for now, but with capital in the bank it plans to launch more widely in Europe next year.