Cashify, a company that buys and sells used smartphones, is the latest India startup to raise capital from Chinese investors after it announced a $12 million Series C round.

Chinese funds CDH Investments and Morningside led the round, which included participation from Aihuishou, a China-based startup that sells used electronics in a similar way to Cashify and has raised more than $120 million. Existing investors, including Bessemer Ventures and Shunwei, also took part in the round.

This new capital takes Cashify to $19 million raised to date.

The business was started in 2013 by co-founders Mandeep Manocha (CEO), Nakul Kumar (COO) and Amit Sethi (CTO) initially as ReGlobe. The business gives consumers a fast way to sell their existing electronics; it deals mainly in smartphones but also takes laptops, consoles, TVs and tablets.

“When we began we saw a lot of transaction for phone sales moving from offline to online,” Manocha told TechCrunch in an interview. “But consumer-to-consumer [for used devices] is highly opaque on price discovery and you never know if you’re making the right decision on price and whether the transaction will take place in the timeframe.”

These days, the company estimates that the average upgrade cycle has shifted from 20 months to 12 months, and now it is doubling down.

With Cashify, sellers simply fill out some details online about their device, then Cashify dispatches a representative who comes to their house to perform diagnostic checks and gives them cash for the device that day. The startup also offers an app which automatically carries out the checks — for example ensuring the camera, Bluetooth module, etc. all work — and offers a higher cash payment for the user since Cashify uses fewer resources. 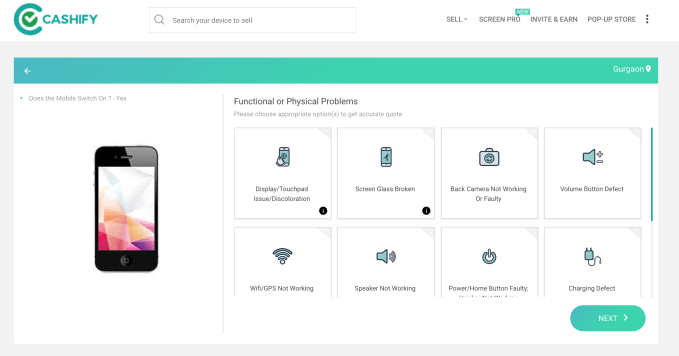 A sample of the Cashify Q&A for selling a device

Beyond its website and app, Cashify gets devices from trade-in programs for Samsung, Xiaomi and Apple in India, as well as e-commerce companies like Flipkart, Amazon and Paytm Mall.

Used device acquired, what happens next is interesting.

The startup has built out a network of offline merchants who specialize in selling used phones. Each phone it acquires is then sold (perhaps after minor refurbishments) to that network, so it might pop up for sale anywhere in India.

With this new money, Cashify CEO Manocha said the company will develop an online resale site that will allow anyone to buy a used phone from the company’s network. Devices sold by Cashify online will be refurbished with new parts where needed, and they’ll include a box and six-month warranty to give a better consumer experience, Manocha added.

Today, Cashify claims to handle 100,000 smartphones a month, but it is planning to grow that to 200,000 by the end of this year. Cashify said its devices are typically low-end, those that retail for sub-$300 when new. A large part of that push comes from the online site, but the startup is also enlarging its offline merchant network and working to reach more consumers who are actually selling their device. That’s where Manocha said he sees particular value in working with Aihuishou.

Cashify is also developing other services. It recently started offering at-home repairs for customers and Manocha said that adding Chinese investors — and Aihuishou in particular — will help it with its sourcing of components for the repairs service and general refurbishments.

Cashify estimates that the used smartphone market in India will see 90 million phones sold this year, with as many as 120 million trading by 2020. That’s close to the 124 million shipments that analysts estimate India saw in 2017, but with surprisingly higher margins.

A reseller can make 10 percent profit on a device, Manocha explained, and Cashify’s own price elasticity — the difference between what it buys from consumers at and what it sells to resellers for — is typically 30-35 percent, he added. That’s more than most OEMs, but that doesn’t take into account costs on the Cashify side, which bring that number down.

“When I sell to a reseller, the margins aren’t that exciting, which is why we want to sell direct to consumers,” the Cashify CEO said.

The startup has plenty going on at home in India, but already it is considering overseas possibilities.

“We will focus on India for at least the next 12 months, but we have had discussions on markets that would make sense to enter,” Manocha said, explaining that the Middle East and Southeast Asia are early frontrunners.

“We are working very closely with one of the Chinese players and figuring out if we can do some business in Hong Kong because that’s the hub for second-hand phones in this part of the world,” he added.

Note: The original version of this article was updated to correct that Amit Sethi is CTO not CFO.